Deception Island is actually an active volcano. The last eruption was in 1969. At the moment it is dormant though and it is a safe anchoring place, inside the crater. Who can say that he was on a ship inside an active volcano?
We had a long day ahead of us, with visits planned to the largest colony of Chinstrap penguins, (about 250.000), making our own jacuzzi by mixing the almost freezing ocean water with the scalding hot water that wells up from the volcano and visiting Whaler's Bay where the remnants of an old whaler's station is decaying to time. So we were up for an early start.
However, the weather in Antarctica can be a hazard. We arrived with very strong winds (7 Bft), the sea was rough and it was snowing once in a while. To make things worse, the motor of one of the zodiacs did not seem reliable. After some tests with it the captain decided to cancel the landing. There was a serious risk if the motor would break down in this weather and you always need to have a backup, what if the good one would run into problems as well? 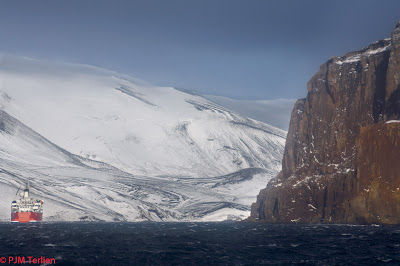 Deception Island is also very accessible for bigger ships and a popular stop, so we encountered a few other touring ships, some of those approaching us to take pictures of the Europa. It must be a stunning sight if you are on another ship and then suddenly see a tall ship in this environment.

When the weather calmed down a few hours later we could net go directly to Whaler's Bay, because of the regulations, no more than one ship can visit the same place at the same time and so you need to reserve a time slot in advance. This might sound restrictive but is for the best, we are only visitors and one of the aims of all the rules is to have as little impact on the environment as possible. So no more than 100 visitors are allowed on one visit. And actually, you do not want to neither, you want to have the places more or less for your own, feeling as if you are truly exploring.

In the evening we visited at Whaler's Bay the whaling station, which was abandoned in 1931 and remains of a research station that was destroyed by the volcano in 1969, both left to their own. Because of the late hour and little light, the fresh thin layer of snow on the ashes and the still blowing wind this was a magical place.

This album here has pictures of Deception Island, Gentoo and Chinstrap Penguins, Skuas, a Fur seal and Whaler's Bay at dusk.
It has 46 pictures.

Videos and Albums (First link has the thumbails on the right, the second on the bottom)